Home » Business » One of Chicago’s Best Views, Cité, is for Sale
Business

Among Chicago’s most-favored highest-altitude restaurants, Cité certainly has one of the best views. Sitting atop one of the tallest residential buildings in the world, the space has expansive, 360 views of the city’s skyline and lakefront. Now, the elegant steak and seafood restaurant is up for sale.

Residing in a circular space high up on the 70th floor of Lake Point Tower, the upscale restaurant has been in operating in the same space for decades.

Owner Evangeline Gouletas had been considering selling the property before the coronavirus pandemic prompted a shutdown of the restaurant industry, real estate broker Rick Scardino observed.

“It’s been in the works for a long time,” Scardino said. “This is really the last of Evangeline’s holdings in this market.”

Cité recently opened to a limited number of diners, according to the state’s reopening plan, and it plans to remain open until the space is sold.

A Lucrative Opportunity to Own a Piece of Chicago’s Skyline

The Lake Point Tower space totals 7,536 square feet, including 4,706 square feet on the 70th floor. The space on the unit’s second floor used as an office, kitchen and storage could be sold separately, or is available for use with a new restaurant.

This is a lucrative opportunity for either a restaurant or a residential space, since it sits on top of the only high-rise east of Lake Shore Drive.

Broker Rick Scardino pointed out that part of the appeal of Cité’s location is that “It’s the only commercial building east of Lake Shore Drive, with a 360-degree view of the city.” He also said that “The phrase ‘once-in-a-lifetime’ is overused in real estate, but you can argue that this really is a once-in-a-lifetime opportunity.”

Scardino has declined to list, or even estimate the value of the space, so it’s hard to say exactly how much the space is selling for. But for such a stellar location as this, a price tag in the millions would not be out of the question.

One of the reasons Cité’s space is so alluring is its utility; if the space is to be reimagined as a new restaurant, the new restaurateur would already have a complete kitchen, but could also purchase the open rooftop space on the 69th floor from the building’s condo association, and turn it into an outdoor dining area. 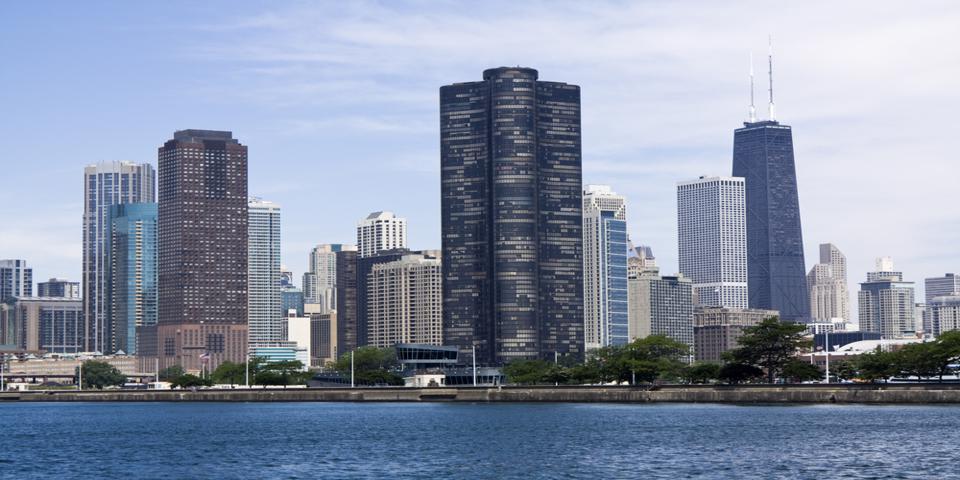 The black glass, three-winged Lake Point Tower is the only high-rise building east of Lake Shore Drive. It was designed by architects John Heinrich and George Schipporeit, who studied under the acclaimed master Ludwig Mies van der Rohe at the Illinois Institute of Technology. of Ludwig Mies van der Rohe was one of the luminaries of the Bauhaus movement and International Style school.

Due to its height and a windy, lakeside location, the tower has to withstand high winds. At the core of the building are a 59-foot wide triangular core, housing three stairwells, and nine elevators. This core supports all of the building’s vertical weight, allowing the columns on the facade of the building to be much lighter.

Lake Point Tower first opened its doors as an apartment building in 1968, and the entire building was finally completed the next year. The panoramic views of the Chicago skyline and Lake Michigan from the upper floors make Lake Point Tower a highly desirable location.

Evangeline Gouletas family development firm, American Invesco, converted the high-rise into condos during the late 1980s. As of now, there are 758 separate condos inside Lake Point Tower.

Lake Point Tower was among the first residential high-rises in a major city to have its own park; three stories above the ground, is a two-and-one-half acre park with a pool, playground, duck pond, and waterfalls. The second and ground floors of the building also feature an assortment of shops and restaurants under the park.

Tags: CitéCité is for Sale