Chicago Cubs fans are not going to let the coronavirus restrictions keep them away from Wrigley Field this summer.

As the 2020 MLB season resumes in late-July, as is expected, most teams around the country will play without fans in the stands. That will definitely be a new and unusual experience for players used to pitching and hitting to a stadium packed with cheering fans.

However, the Chicago Cubs have a different vision, if Cubs fans are willing to pay the price to watch live games at Wrigley Field.

The Cubs open the 2020 season at Wrigley Field on Friday, July 24, playing against the Milwaukee Brewers.

A Strange Season for the Chicago Cubs

During the last offseason, longtime manager Joe Maddon was replaced with ex-Cubs catcher David Ross. At the time, it appeared Ross’s biggest challenge would be bringing the Cubs to the playoffs after a disappointing year.

Then, the COVID-19 pandemic, and the ensuing shutdowns, began. Rather than managing 162 games, Ross will only handle 60; that’s assuming that the pandemic-related restrictions don’t lead to any more canceled games.

Bookmakers in Las Vegas are cautiously optimistic about the Cubs’ chances during this short, summer season. For example, Bet Online projects the Cubs’ over/under wins total at 32, only behind the St. Louis Cardinals, at 32.5.

The New York Yankees and the Los Angeles Dodgers are both favorites to win the 2020 World Series. Both teams have a projected over/under win total of 37.5.

The Cubs May Not Fill the Stands This Year 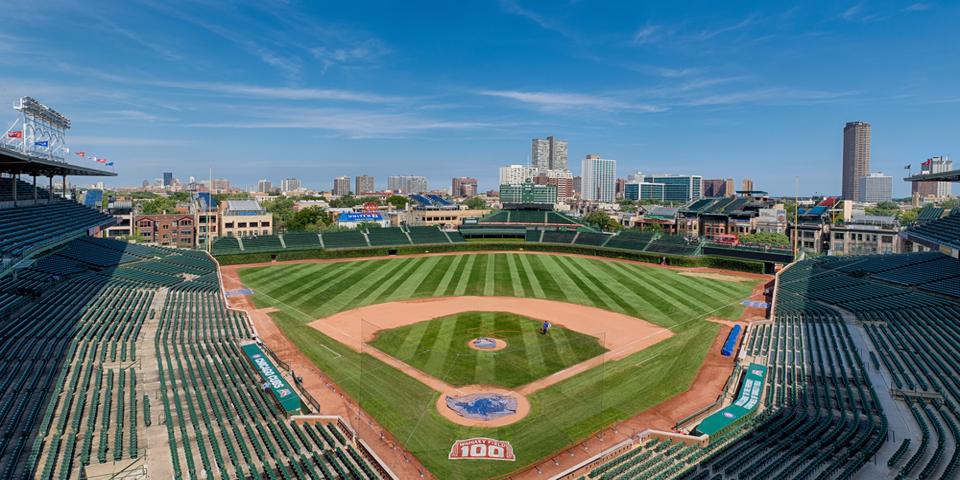 Perhaps the strangest and most disturbing thing about the 2020 MLB season will be stadiums devoid of fans.

Teams such as the Tampa Bay Rays and the Miami Marlins often play in less than filled stadiums. On the other hand, Fenway Park, Yankee Stadium, and Wrigley Field are usually packed, even on scorching, hot summer afternoons, and frigid fall nights.

A few stadiums could have fans later this year. But in the meantime, teams are considering faking the excitement, such as blasting recorded fan cheers to placing cardboard cutouts of fans in the seats.

Covid-19 Restrictions Will Not Keep Cubs Fans Away

While Wrigley Field won’t have the usually packed stadium of fans for each game, the clever Cubs have devised a backup plan.

According to ESPN, The city of Chicago has approved the team to set up seats on the rooftops across the street from Wrigley Field. These makeshift stands can only be filled to for 25% capacity, and these seats will go for between $150 and $300 during the season.

The privately-owned rooftops have raised their prices this year, taking advantage of the scarcity resulting from the shutdown and social distancing restrictions. For example, Wrigley View Rooftops, which has a view of left field, sells regular tickets for $350, tickets for Sunday games for $250. Thankfully, that price also includes food, wine, and beer.

“I’m going to have to hit some balls onto the rooftops and give them a good, little shimmy dance out there,” joked Schwarber.

Likewise, Wrigley Rooftops manages 11 different rooftops each with its own distinctive amenities, style, and views.

The Cubs are not ruling out possibly welcoming back their fans to Wrigley Field at some point in the 2020 season. Cubs Vice President Mike Lufrano said the team hopes that fans will be allowed to sit in the stadium, but that they will obey the orders of the city’s health officials.

Band of Bohemia Closes Temporarily Due to Employee Complaints on Instagram

The Best Things to Do in Chicago This Fall, for Locals and Visitors Alike

Ten Wonderful Free Things You Can Do in Chicago This August

Best Activities for Kids in Chicago – According to Locals